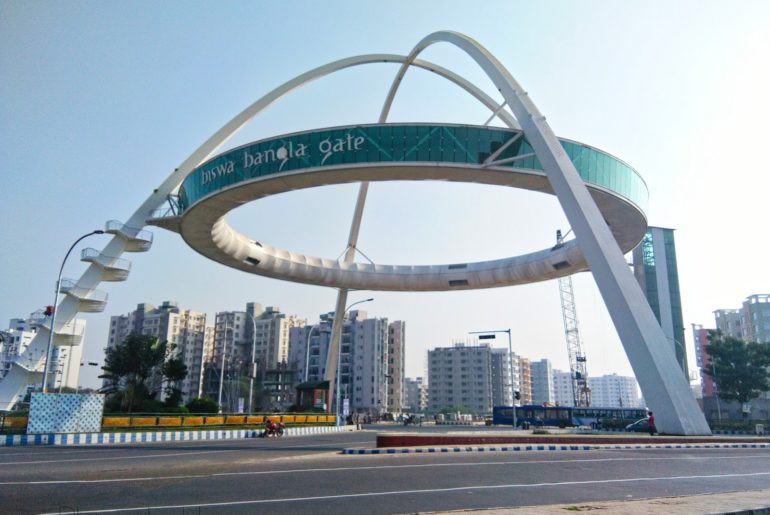 Would you like to cycle to work every day?

Pritam Mukherjee, a 28 year old IT professional, swears by this daily exercise!

He lives in Salt Lake CG Block. Every morning, Pritam comes to New Town via auto, and then rents a cycle to his office in DLF Gate 2. He says that cycling helps him to clear his mind before starting the day’s work.

This fascinating way of public transport is only available in the New Town and Rajarhat area. There are mobile apps that provide bicycles for a transport – same way an Uber works. This trend has become hugely popular in this side of the town. Many office goers are choosing to cycle their way to and from office, at least for a certain distance. According to a study published in British Medical Journal in April 2017, cycling to work has numerous health benefits. Source http://bit.ly/2T3Rkgm

New Town, the up-and-coming satellite city of Kolkata, is a place of many such new trends. Both commercial and residential development is on the rise in this part of the town. And why not? The neighborhood sure has a lot of attractions!

New Town is only the second planned township in Kolkata, after Salt Lake. Originally built of two small villages – Rajarhat and Bhangar – today the area is fast growing into one of the prime locations of the city. The State is also taking steps to make New Town a ‘Smart City’.  The 10.5 km stretch connecting the Main Arterial Road to the Airport to Sector V is enabled with free Wi-Fi, making it India’s first Wi-Fi road connectivity. To promote a Green City, electric buses and auto rickshaws that run on batteries have been introduced as means of public transport.

For eons, Dalhousie has been considered as the CBD of Kolkata. As the number of offices grew, it expanded to Park Street and Maidan area. But with the IT boom that happened in early 2000s, the city witnessed the rise of a new CBD – Sector V in Salt Lake. In the last decade or so, Sector V has become the go-to location for several corporate offices and IT companies. But now, Sector V has also become over-burdened.

To solve this, New Town is being promoted as the next CBD of Kolkata. The first step towards this was taken when Tata Consultancy Services (TCS) chose to build their 40-acre IT campus “Gitanjali Park” in New Town. The DLF 2 IT Park, Ecospace Business Park and Ecosuite are also prime examples of how leading companies in Kolkata are choosing New Town as their office space.

Most of the offices in New Town are part of a larger campus built in the style of a business park. The offices in Dalhousie are mostly cramped up spaces located in a building. They lack basic facilities like parking or a conference room, hygienic food, clean bathrooms, and such.

Imagine buying a new car and then having to park it on side of a busy road. Someone can just bump it anytime of the day and leave scratches on your brand new car! Oh, the horror! If you have an office in a business park, employees can get access to basement and also floor-level parking.

The street food in Dalhousie is famous in all of Kolkata. You can get Chicken Biriyani at Rs. 80 or a plate of Chole Bhature at just Rs. 60. Most people working in Dalhousie have their daily lunch from these street-side shops. While the food is great for our taste buds, in the long run, it is bad for our health. If you are working in an office in New Town, most business parks have a food zone in their campus which offers healthy and hygienic food.

The business parks and IT campuses are equipped with all the modern amenities like reserved parking area, security kiosks, food court zone, meeting lounge, and more. Sometimes, the campus may also have a Luxury Club which includes services like gymnasium, café or a pub. It is an opportunity to relax wind down after a hard day’s work.

The ‘Darling’ of Real Estate Companies

Thanks to the upcoming metro rail project and the various business parks in the area, New Town has become a leading real estate location even when it comes to residential projects. There are a huge number of housing complexes that are already being lived in and many upcoming ones in the pipeline. As more people continue to reside in the neighborhood, there has also been a peripheral development in New Town. Shopping malls, leading hospitals, reputed educational institutes and luxury hotels have come up in the last few years. These include City Center II, Axis Mall, CENTRAL store, Tata Medical Center, Bhagirathi Neotia Woman & Child Care Centre, Techno India College, Amity University, Novotel, Pride, Swissotel and many more such names.

Ambuja Neotia Group has been a major contributor in the development of New Town. From housing projects to business parks to hotels, Ambuja is a very important chapter in New Town’s story!

One Reply to “New Town – The new address of business”