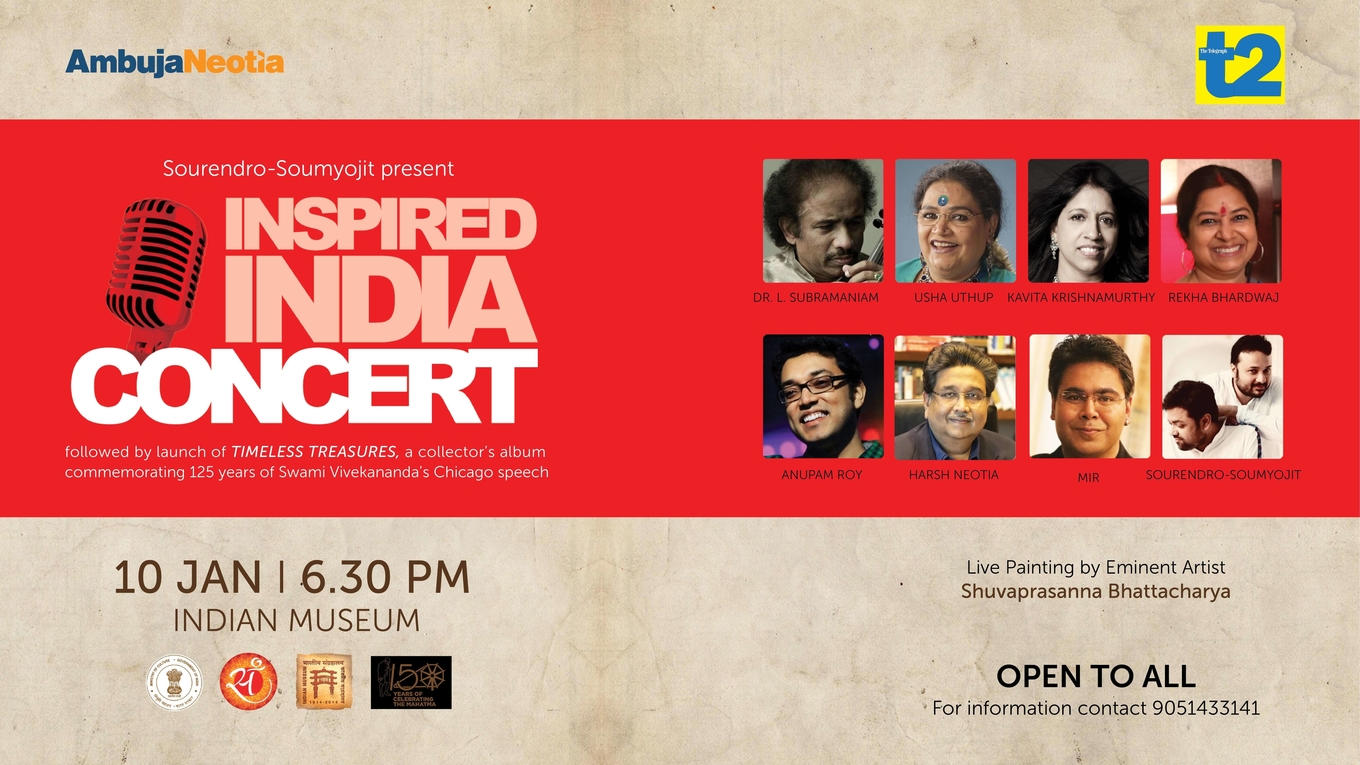 ‘Sectarianism, bigotry, and its horrible descendant, fanaticism, have long possessed this beautiful earth. They have filled the earth with violence, drenched it often and often with human blood, destroyed civilisation and sent whole nations to despair. Had it not been for these horrible demons, human society would be far more advanced than it is now! But their time is come; and I fervently hope that the bell that tolled this morning in honour of this convention may be the death-knell of all fanaticism, of all persecutions with the sword or with the pen, and of all uncharitable feelings between persons wending their way to the same goal.’ – Swami Vivekananda

On the 10th of January, Sourendro & Soumyojit in association with Ambuja Neotia announced a unique musical concert titled Inspired India to commemorate 125 years of Swami Vivekananda’s Speech at The World Parliament of Religions in Chicago. The event was held at The Indian Museum. 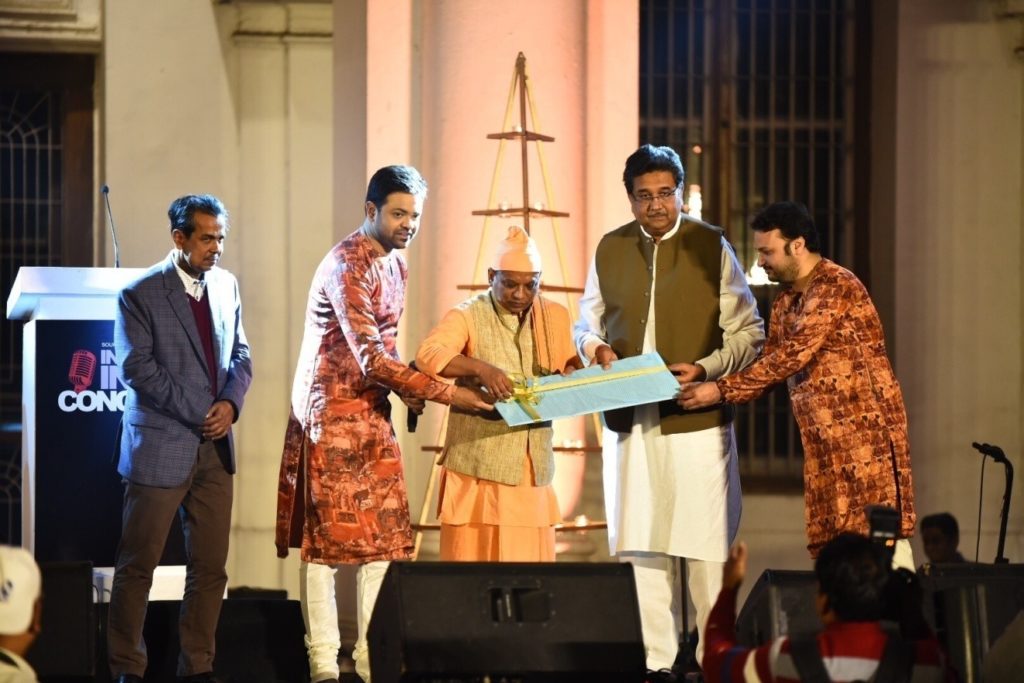 The event saw the release of “Timeless Treasures” – an album presented by Harshavardhan Neotia to celebrate 125 years of Swami Vivekananda’s speech at the World Parliament of Religions in Chicago.

It was a humble attempt to record Swamiji’s six historic speeches in his own voice to connect today’s youth with Swamiji’s idea of pluralism and tolerance. The speeches were presented beautifully with contemporary music composed by Sourendro & Soumyojit, to resonate with the universality of thought imparted by Swamiji. 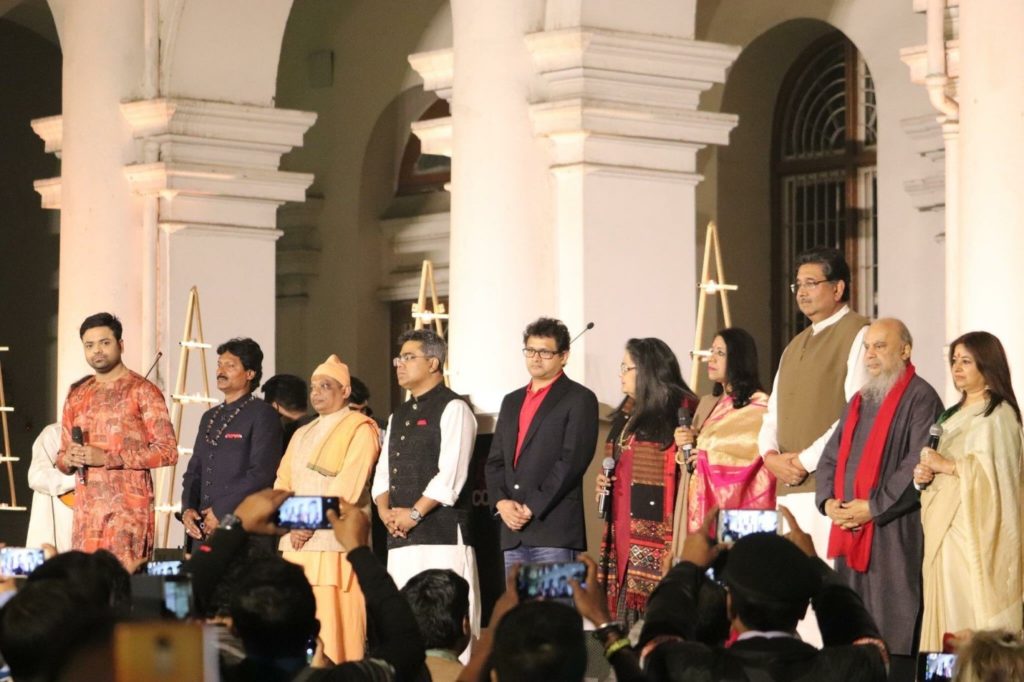 The album is an initiative to keep alive the glimpses of Swami Vivekananda’s life and teachings while taking up a fresh relevance on his works. He helped build a bridge between Indian and Western culture by interpreting Hindu philosophy to the West in an idiom which they could understand.

To bridge the gap, music is the one sole thing that can connect to people across ages, genders or race. Music has always been the medium to energize, ignite, and bind people together. “We shall overcome” of the American civil rights movement, “VandeMataram” for the Indian freedom movement or Lennon’s “Imagine” for Vietnam War – music has played a very important role in our society.

Music holds a special place in all our lives. To celebrate the ideologies of Swamiji, the concert brought in a never before combination of artistes of various genres, age groups in one platform spreading Swami Vivekananda’s message of humanity.  Through a collection of songs and readings by some of the eminent artistes in the country, the concert celebrated Swamiji’s ideology.

Swami Vivekananda’s ideas, which emphasized the distinction between religion and spirituality, caught the imagination of the world and he became India’s most prominent ambassador, opening the eyes of the West to the Vedantic treasures that lay across the seas in the East.

The album features Mr. Harshvardhan Neotia and his efforts to record Swami Vivekananda’s six speeches delivered in Chicago way back in 1893. 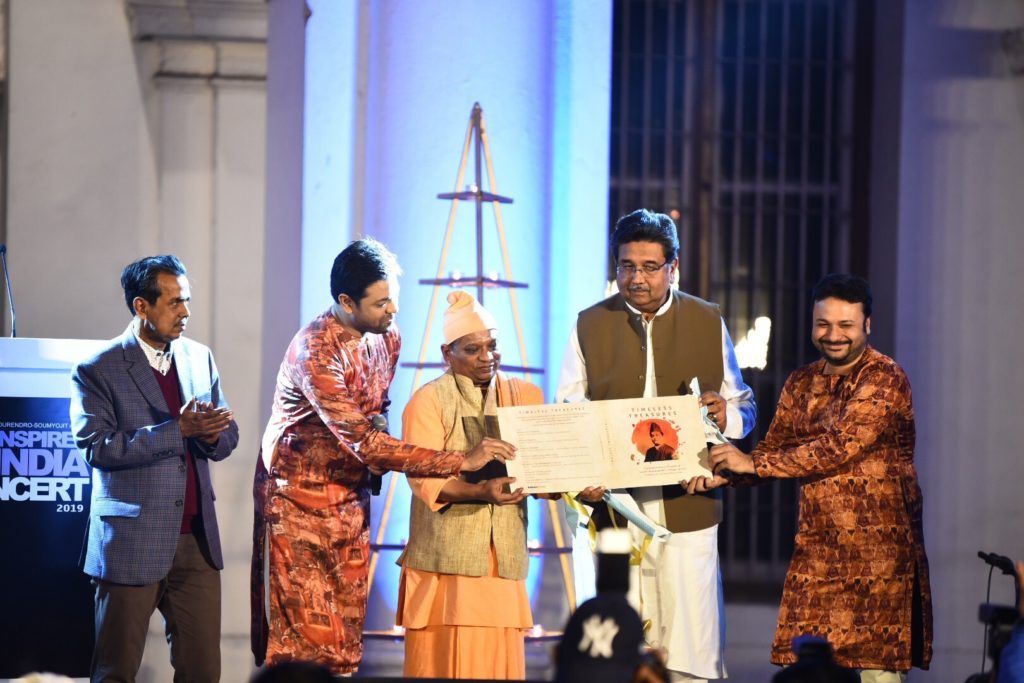 “Today, as the world gets divided ‘into fragments by narrow, domestic walls,’ Swami Vivekananda’s thoughts immediately ignite our imagination because of the universality of his preachings. May the exalted goals he set for humanity inspire us to follow in his footsteps and make us proud to be Indians” says Mr. Harshvardhan Neotia.

What sets this initative apart is the implementation of music which binds the ideologies and philosophies into one beautifully stringed piece. The music was composed by Sourendro & Soumyojit who are very much inspired by Swami Vivekananda.

“We loved Swamiji’s conviction and confidence when he said that if Buddha has a message for the East, he has one for the West. So we created a soundscape that is essentially Indian but has an intricate feel of globalisation. Just like Swamiji who was a Universal Man”,

The event was an initiative that touched a lot of hearts and kept the philosophies of Swami Vivekananda alive. He still remains as one of the most commended and sought after icon for the youth.

The album can be availed on –