East India Room — where you savour through Bengal’s colonial past

East India Room — where you savour through Bengal’s colonial past

Who said fusion food is today’s innovation? For as long back as the early 17th century — the beginning of the colonial era — the Bengal kitchen had been the melting pot, quite literally, for the most organic food fusion to have ever happened.

Flavours, ingredients and techniques of the Portuguese, British, French and Dutch cuisines blended with those of the Bengali, Chinese, Mughal, Nepali, Tibetan and other indigenous culinary traditions. The result? A foodscape which is a chef’s delight and a gourmand’s dream!

It is this rich and delicious heritage of colonial Bengal that has been meticulously researched and curated to give you the eclectic menu at East India Room, the fine-dining restaurant in Raajkutir — The Boutique Hotel at Swabhumi.

Take the classic Prawn Cocktail as a starter. A typical British milestone on Calcutta’s food map, the delish combo of cooked shrimps and cocktail sauce has enticed the gourmet Calcuttan since the days of the Raj. The poached juicy Bay of Bengal prawns dipped in a homemade sauce is a winner at East India Room.

One of the early colonisers to reach Bengal were the Portuguese, who brought many a new ingredient to the Bong kitchen. From the ubiquitous potato to the humble okra and the fiery green chillies — the Bong foodie owes a lot to the Portuguese traders and merchants. Bandel Cheese is believed to be one from their pantry that has stood the test of time and continues to add pizzaz to otherwise bland dishes. At East India Room, try the Portuguese Bandel Cheese Malakoff, a plate of deep-fried cheese balls served with a tomato raisin chutney. 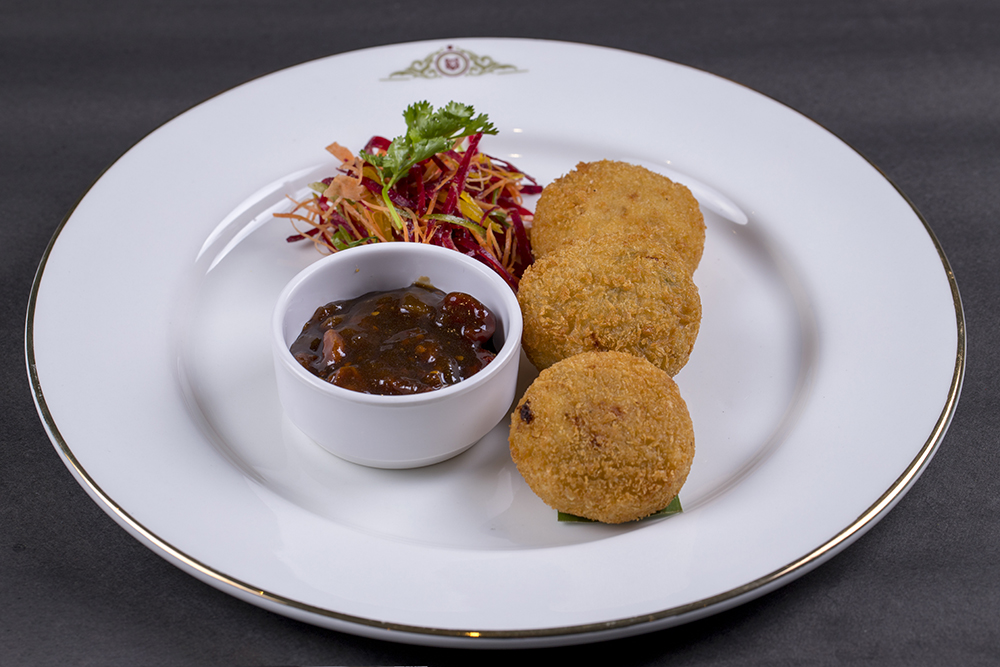 Among the many contributions of the Anglo-Indian community towards Bengal’s history and tradition, their culinary delights that have evolved through time mixing primarily British recipes with local flavours stand tall. The high tea snack named Pantheras, a sort of crepe roll stuffed with minced meat curry, has been recreated to give you the Sovabazar Rajbari Winning Pantheras at East India Room. Vegetarians can have the version made with minced soya chunks. #MustNotMiss

The quaint little town of Chandernagore was a French bastion amid the British-dominant political map of erstwhile Bengal. Known for their intricate recipes the world over, the French did leave quite a mouthful back in the Bong kitchen. At East India Room, begin with the French consommé, a clarified poultry or tomato soup with belly button dumplings, and then move on to the flavourful Lobster Thermidor, a gastronomical celebration of lobster meat, cognac and egg yolk. 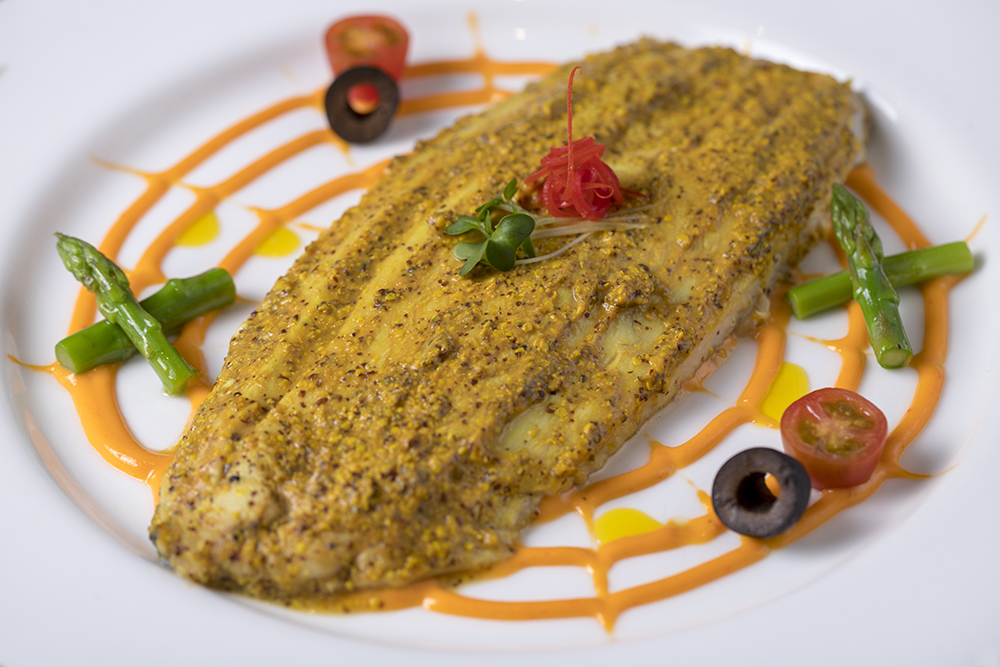 The colonial days had seen the advent of ham and cheese to the Bengal shore, brought by the shipping merchants, exclusively for the British population. However, it didn’t take much long for the Bengali food lover to get his hands on these cured meat and cheese. Try Job Charnock’s Chicken and Ham Salad, a bowl of tossed in chicken, ham, pineapple, crunchy lettuce and poached quail’s egg, at East India Room. If you are not a salad person, this one might convert you!

With the British Raj came a ladleful of cooking techniques that were assimilated to the Bengali cook’s repertoire with panache. Baking, grilling and poaching are some of the skills that Bengalis learnt to use more effectively in their kitchens after the Europeans came. The result is obvious — you get dishes like Baked Crab and Phulkopi Roast to feast on at East India Room.

An ode to the colonial cuisine of Bengal can’t be complete without a reference to the local recipes tweaked and served Brit-style to the sahibs and memsahibs during their travels within Bengal. One such dish is the Colonial Mutton Dak Bungalow. The dish of the office para — Dacres’s Lane Stew perhaps owes its existence to this culture of meat stews in the sahibpara of the old town. At East India Room, you get both. 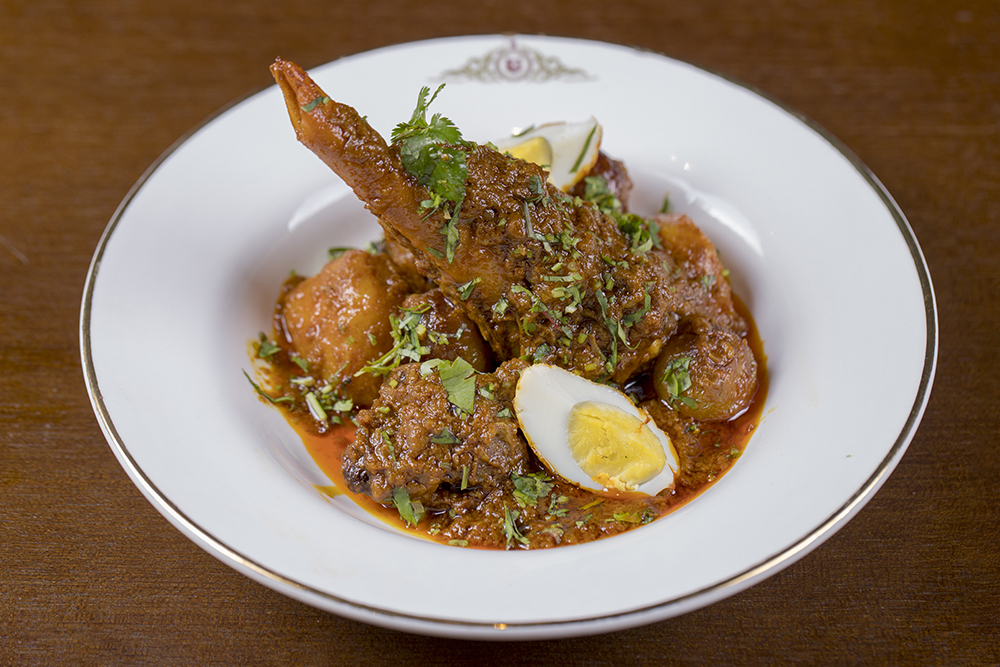 Colonial Bengal means the undivided Bengal and the recipes that every Bengali worth his salt loves include quite a few Opaar Bangla specialities. Rajshahir Loochi Aloor Dum, Dhakai Porota, Dhakai Morog Polao and Old Dhaka City Jali Kabab are a few such delicacies from the East India Room menu.

One of the most important contributions of the British to Bengal’s F&B map is the introduction of tea. Darjeeling became the cynosure of all eyes as the hills gave birth to some of the finest tea plantations of the world. High tea became fashionable and biscuits and bakery the talk of the town. And among all the baked goodness, the English-style layered cake took the cherry!

One more thing happened because of the increased interaction between Kolkata and Darjeeling. Many Nepali and Tibetan dishes popular up in the hills made their way to the plains of the Hooghly. At East India Room, try the Darjeeling Thenthuk, a heart-warming noodle soup for the soul.

Did we forget the classic Fish and Chips? The Elliot Road Cutlet or the Chicken a la Kiev? Well, one visit is not enough to savour all the delicacies at East India Room. Keep visiting, Happy eating!